Ebola virus (EBOV, formerly designated Zaire ebolavirus) is one of five known viruses within the genus Ebolavirus. Four of the five known ebolaviruses, including EBOV, cause a severe and often fatal hemorrhagic fever in humans and other mammals, known as Ebola virus disease (EVD).

Structure
EBOV carries a negative-sense RNA genome in virions that are cylindrical/tubular, and contain viral envelope, matrix, and nucleocapsid components. The overall cylinders are generally approximately 80 nm in diameter, and having a virally encoded glycoprotein (GP) projecting as 7-10 nm long spikes from its lipid bilayer surface. The cylinders are of variable length, typically 800 nm, but sometimes up to 1000 nm long. The outer viral envelope of the virion is derived by budding from domains of host cell membrane into which the GP spikes have been inserted during their biosynthesis.[citation needed] Individual GP molecules appear with spacings of about 10 nm. Viral proteins VP40 and VP24 are located between the envelope and the nucleocapsid (see following), in the matrix space. At the center of the virion structure is the nucleocapsid, which is composed of a series of viral proteins attached to a 18–19 kb linear, negative-sense RNA without 3′-polyadenylation or 5′-capping (see following);[citation needed] the RNA is helically wound and complexed with the NP, VP35, VP30, and L proteins; this helix has a diameter of 80 nm and contains a central channel of 20–30 nm in diameter. The overall shape of the virions after purification and visualization (e.g., by ultracentrifugation and electron microscopy, respectively) varies considerably.


Genome
Each virion contains one molecule of linear, single-stranded, negative-sense RNA, 18,959 to 18,961 nucleotides in length. The 3′ terminus is not polyadenylated and the 5′ end is not capped. This viral genome codes for seven structural proteins and one non-structural protein. The gene order is 3′ – leader – NP – VP35 – VP40 – GP/sGP – VP30 – VP24 – L – trailer – 5′; with the leader and trailer being non-transcribed regions, which carry important signals to control transcription, replication, and packaging of the viral genomes into new virions. Sections of the NP, VP35 and the L genes from filoviruses have been identified as endogenous in the genomes of several groups of small mammals.

It was found that 472 nucleotides from the 3' end and 731 nucleotides from the 5' end are sufficient for replication of a viral "minigenome", though not sufficient for infection. The minigenome's genetic material by itself is not infectious, because viral proteins, among them the RNA-dependent RNA polymerase, are necessary to transcribe the viral genome into mRNAs because it is a negative sense RNA virus, as well as for replication of the viral genome. 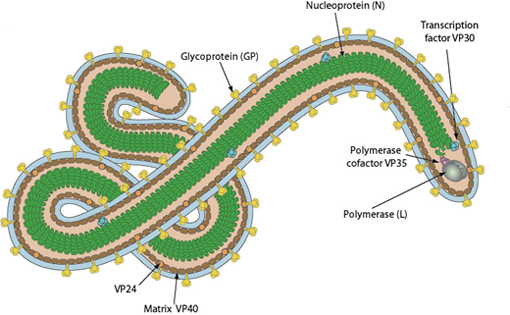 Entry
There are two candidates for host cell entry proteins. The first is a cholesterol transporter protein, the host-encoded Niemann–Pick C1 (NPC1), which appears to be essential for entry of Ebola virions into the host cell and for its ultimate replication. NPC1 was shown to be critical to entry of this filovirus, because it mediates infection by binding directly to viral GP. When cells from Niemann Pick Type C patients lacking this transporter were exposed to Ebola virus in the laboratory, the cells survived and appeared impervious to the virus, further indicating that Ebola relies on NPC1 to enter cells. The same studies described similar results regarding NPC1's role in virus entry for Marburg virus, a related filovirus. A further study has also presented evidence that NPC1 is critical receptor mediating Ebola infection via its direct binding to the viral GP, and that it is the second "lysosomal" domain of NPC1 that mediates this binding.

The second candidate is TIM-1 (aka HAVCR1). TIM-1 was shown to bind to the receptor binding domain of the EBOV glycoprotein, to increase the receptivity of Vero cells. Silencing its effect with siRNA prevented infection of Vero cells. TIM1 is expressed in tissues known to be seriously impacted by EBOV lysis (trachea, cornea, and conjunctiva). A monoclonal antibody against the IgV domain of TIM-1, ARD5, blocked EBOV binding and infection.

Replication
Being acellular, viruses such as Ebola do not replicate through any type of cell division; rather, they use a combination of host- and virally encoded enzymes, alongside host cell structures, to produce multiple copies of themselves. The virus begins its attack by attaching to host receptors through the glycoprotein (GP) surface peplomer and is endocytosed into macropinosomes in the host cell. To penetrate the cell, the viral membrane fuses with vesicle membrane, and the nucleocapsid is released into the cytoplasm. Encapsidated, negative-sense genomic ssRNA is used as a template for the synthesis (3'-5') of polyadenylated, monocistronic mRNAs and, using the host cell's ribosomes, tRNA molecules, etc., the mRNA is translated into individual viral proteins.

These viral proteins are processed, a glycoprotein precursor (GP0) is cleaved to GP1 and GP2, which are then heavily glycosylated using cellular enzymes and substrates. These two molecules assemble, first into heterodimers, and then into trimers to give the surface peplomers. Secreted glycoprotein (sGP) precursor is cleaved to sGP and delta peptide, both of which are released from the cell.[citation needed] As viral protein levels rise, a switch occurs from translation to replication. Using the negative-sense genomic RNA as a template, a complementary +ssRNA is synthesized; this is then used as a template for the synthesis of new genomic (-)ssRNA, which is rapidly encapsidated. The newly formed nucleocapsids and envelope proteins associate at the host cell's plasma membrane; budding occurs, destroying the cell.